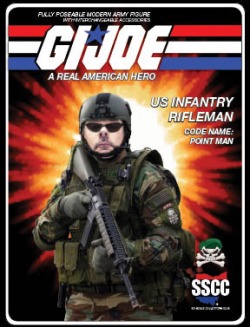 I began collecting vintage GI Joe figures in 1984. A trip to England in 1984 reacquainted me with an old childhood  friend. In 1984 Britain, they were still producing Action Man (Palitoy). I bought two and some uniforms and brought them home, where I dug out a worn Adventure Team Commander. That pretty much started it all. I was hitting every antique shop and toy show I could find. In 1990, I learned about Cotswold Collectibles and that made the searching a lot easier. In 1992 I walked into a Target store and found a Hall of Fame Duke and thought I had found the holy grail. I attended the 1994 Joe Convention in New York and the 2000 21st Century Toys Convention in LA. While living in Denver I was a member of a couple of different Joe clubs. My collection today sits at around 700+ figures and a variety of vehicles and field pieces from a variety of eras.

In the mid-1990's, I got my first digital camera, which came with a piece of software called Adobe Photo Deluxe. This was catalyst for taking pictures of my Joes and adding realistic backgrounds to my photos. Without digital photography and photo manipulation software, it would be a most difficult hobby to pursue. I am a graphic artist by trade, but it is only in the last couple of years that I have been able to upgrade to professional software on my home computer. I now use a combination of Adobe Photoshop, Illustrator and Indesign to work on pictures and text and a program called Comic Life for page layout of my comics. The hobby is really fun now.

At the beginning of 2008, my family moved to Ohio and I was able to join the SSCC Ohio figure club. This is the best group of guys around and we have a great time together. Check out the club website for a look at what some of the members are doing.